A Classic Reimagined Necromancer Games and Judges Guild have teamed up to expand and update the classic module Caverns of Thracia. Caverns of Thracia has 10 ratings and 1 review. Ken said: Simply put, the greatest D&D adventure of all time. Or damn close. The author is a 3 dimensiona. . Caverns of Thracia The Original Classic Adventure by Paul Jaquays, with new maps and editing by Bob Bledsaw III. Designed for beginning, low-level. 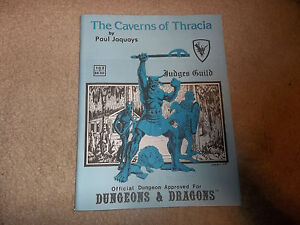 Listen to Kamasi Washington. Not just The Epic, his new stuff too. Don’t be a dick.

If you find yourself posting or responding just to score points or be snarky, you may get reported. Remember, we’re all in this together. We got shit to do thrcaia. No screencaps of a random frame of a video.

Don’t post links to illegal PDFs. Whoever uploaded that terrible scan of Night Below didn’t have caveens rights to it. We all have Google, we can find that shit ourselves. No need to encourage piracy. Looking over all three modules, they thradia similar themes: Upper dungeon that leads to lower water filled cavern that functions as a sorta wilderness. All three adventures are low level, but contain high level areas. The main adversaries are beast-men lead by minotaurs mixing with dark cults.

I was thinking about connecting all three via the under ground cavern portion of the adventures and mix in a cup of Veins of the Earth. Bonus might also be throwing The Keep on the Borderlands connecting each of the top side areas.

Maybe the Caves of Chaos are a more linear hill or mountain range with each of the previous mention adventures’ “keeps” being a part of it kind of like GoT’s The Wall. The Lost City’s Zargon could the the original reason for the collapse of the whole thing.

Sailor’s Chaos Lord might have been the head priest of the chaos cult that summoned Zargon. The cult could have been an offshoot of Thracia’s Death Cult.

As a Judges Guild fan and thus dating myself I think by what you described would work well with modifications plus your own creativity, i. Sounds like it would be a lot of fun. Pretty fucking great cavdrns of course it can get brutal too.

Only run it once myself and it was a tpk. I’d go with VotE for sure. Borderlands would take a little work to get the ‘edge’ I feel like the others have,but this sounds like a great idea.

Maybe even bolt on the whole D series when they get up in level. Borderlands is certainly the less exciting of the 3.

Any maybe I should just take the Keep as a sort of homebase for the players and leave the rest behind. Use of this site constitutes acceptance of our User Agreement and Privacy Policy. Log in or sign up in seconds. Submit a new link. Submit a new text post.

Is Matt guesting on Critical Role?! I mean why not? Welcome to Reddit, the front page of the internet. Become a Redditor and subscribe to one of thousands of communities. OR is one of these modules so superior to the others its not really worth it?

OR do a few more things need to be added to make this be a sandbox worth exploring? Want to add to the discussion? I just bought the DCC book and I’m very curious.